We Will Bury You

As I child I was convinced that I would die in a nuclear holocaust, there was films like Red Dawn, and TV specials like The Day After to fuel my imagination. And even a little kid could figure out that Reagan was the type of asshole who would destroy planet earth in order to win against the evil empire. Yes, he really called the Soviet Union the "evil empire", and often. I was raised to believe that there was evil in the world, and it was the USSR. Ironic that when I finally arrive nobody seems to give a shit about communism. It's basically a conversation killer. But I can't stop thinking about what happened here, and can't shake this profound sadness that they gained nothing from the experience, that humanity gained nothing from it, and that this country is now, at least economically, a shameless caricature of it's historic enemy. It's such a politically difficult place, as any critique of capitalism comes off as a likely endorsement of socialism, and the failed utopian experiment that was communism. The big question, the elephant of a question is this: is it possible to create a cooperative society under different (better) circumstances? If the Soviet Union hadn't been run by tyrants, and hadn't existed in a continuous state of war crisis, could it have flourished and provided a better quality of life for it's people? In Petersburg I was hosted in a classic old flat, it's cavernous interiors wallpapered with faded sepia fleur-de-lis and heavy wooden furniture. It's the kind of furnishings that are passed down through generations as inheritance. Sad that we now live surrounded by flimsy particle-board kits shat out from china, assembled by hex-wrench, then later tossed onto the sidewalk when you change apartments. The concert was a festival held in a Soviet cinema hall. It's also palacial proportions common to that time when cinema was considered a keystone of culture, a right of the citizens to see film in relative luxury. It's now disused, I assume the punters are all at the new multiplex watching dubbed versions of the latest hollywood output. Let freedom ring! It's not as if everything has been privatized and turned into a McDonalds. The Hermitage for instance, with it's little collection of 3 million pieces of art, is still keeping it real. And just about every corner has some monument or another, a bronze poet here, a granite tsarina there, an onion-domed fantasy church (see foto) around every other corner. The city center is too old and beautiful to molt for every passing economic fad. 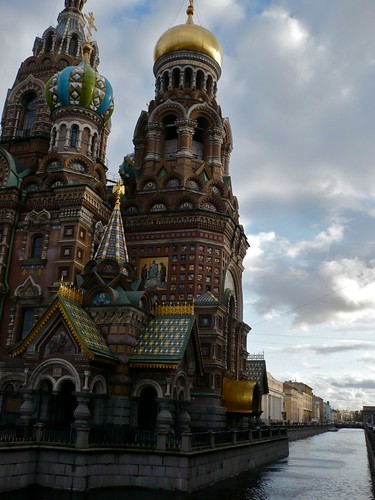 The periphery of Moscow, in contrast, confirms every clich� of modern Russia. �Luxury towers with whimsical shapes, common to places like Singapore or Dubai, sprout incongruently from neighborhoods identical to a blighted Paris banlieue. Black SUV's and benz's with tinted windows vie for roadspace with battered soviet-era mass transit. The newest Moscow airport is actually a giant shopping mall, it's honestly difficult to find the flight gates, hidden coyly behind shops that hawk gold watches or consumer electronics, fast food or sporting goods. At 4am on a sunday morning it was mobbed with consumers. MOBBED! I felt like a wretched hobo, humbly dragging my belongings through the maze, assaulted by the stink of luxury perfumes and the racket of cash registers. For all my sadness and critique I love this place. The people are smart, skeptical, and brutally honest.�And also because it's exciting and dynamic. Seventy years ago they went from serfdom & tsars to an (allegedly) classless worker-run society, then twenty years ago from a tyranny of bureaucrats to a mafia state. Who knows what the fuck is going to happen next? In the meantime there are dystopian hyper-capitalist megacities of the future, only a short flight away from cozy old europe. 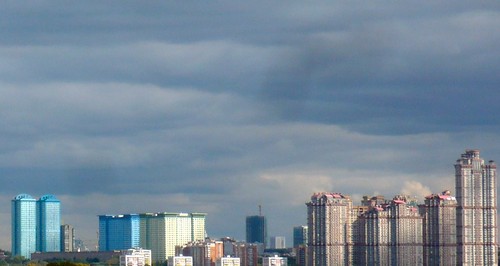