The last post I made here was in the middle of a police raid of the Bike Bloc's production site, The Candy Factory, sorry for not updating sooner. It's been impossible. Disappointed at not finding some bombs or grappling hooks, the police seized one of the double tall bike chariots, inventing a new danish word that translates as "war bike" to describe it as a weapon.�They also took some computers & other items. They didn't find my laptop because it was hidden under a trick seat (pretty sneaky, no?). Lucky we were behind schedule building the Sound Swarm, or they would have invented a danish word for "terror sound bike" as a pretext for sequestering them. It was late in the evening when they let us re-enter. We went into the overdrive to get our shit done, stumbling around until four in the morning- cutting, wiring, welding in that totally inefficient way that you work when exhausted. Then it was time to pull my computer out of it's hiding place and deal with the audio rendering & loading the MP3 players, this took until 7:30am, complicated by the constant power failures that would plunge the buildings into darkness. It was more than a bit creepy being alone editing audio in an big building in total darkness, bundled up in a a puffy survival suit, my exhales creating great plumes of fog, constantly removing the headphones and looking out the windows to make the police weren't about to burst in again. At 8am I left for our rendezvous in full white-out blizzard conditions. Then began one of the hardest feats of endurance I've personally experienced. Pulling a heavy steel trailer of loudspeakers across Copenhagen, on a crappy discarded 1-speed bike, after a night without sleep, with neither breakfast nor dinner the night before, in a motherfucking blizzard, while we were stopped multiple times by van-loads of riot police to be searched and harassed en route. It was equal parts torture and bliss, as some combination of the snowstorm, the paranoia, physical exertion, and sleeplessness brought on a personal serenity I've rarely known. 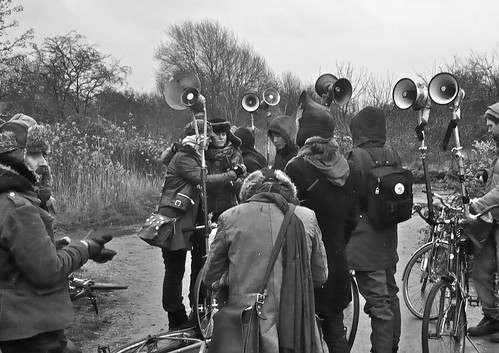 Many things happened this day, I'll describe just one. Faced with no other option to arrive at the site of the COP15 (official name of the Climate Summit), the Sound Swarm turned our speakers up to 11 and invaded a highway in a kamikaze mission directly towards our goal. The traffic came to an abrupt snarl behind us and a pair of motorcycle cops came out of nowhere to make a thin blockade. The gap between the concrete divider and the motorcycle was too small, my sound trailer was ripped off and capsized into the roadway. We were barely free of this first blockade when some riot vans drove at us head-on, disgorging police. It was all slow motion, a lot like being in a car accident. It was also comedic, we were the protagonists of one of those early video games where the player must navigate through an obstacle course filled with zombies. but instead of an 8-bit theme song, we had distorted megaphones. I collided with one of the zombies, uh, I mean police, and was tackled to the ground. Only 2 lives left! and somehow we did get away.� From my narrow perspective the week felt like a fusion of Burning Man, the iditarod (or at least the Idiotarad), and the Seattle WTO.�I've learned some personal lessons on this trip as well. First: duct tape doesn't function below freezing, nor do cheap MP3 players, nor do my fingers. Second:�never, never, never trust a COP. In Copenhagen we witnessed the world's biggest ever collective failure, a failure that demonstrated the obsolescence of the nation-state and our precious economic systems.�We also witnessed the birth of a new movement.�I went to Copenhagen to do whatever I am physically capable to change the outcomes of this summit, so did about a hundred thousand other people. We were pissed off before the Summit. Now we are livid. This is the uber-issue, the biggest problem that humanity has ever confronted, it's bigger than nations, bigger than wars, bigger than AIDS, bigger than the black plague, bigger than capitalism vs socialism, and definitely bigger than those worthless corporations that were all "too big to fail." �Either we keep this planet inhabitable, or is it game over for us & what's left of earth's biodiversity. Skeptical? Have a look at some�climate models What does it take to change the way humanity wrecks this planet? Everything. There should be no technique in the toolbox that is off-limits: hunger strikes, green investing, kidnapping, lifestyle changes, petitions, education, art & media, insurrection. If you've got a skill than bring it. We've also got to recognize that the burden of responsibility falls on us, that small fraction of the earth's population that has a plenty to eat, is literate, has a computer, some free time, and some minimum of civil rights. The other 90% are too busy trying to survive. Bad news reader, if you are looking at this or any other blog you are probably disqualified from inaction. foto: Sound Swarm hatching a plot while hiding in some bushes