I just played last night in Zurich (note: late posting), the promoters are a clever bunch who frame their monthly event as a visit to an imaginary nation in Africa called Tam Tam. The public passes through a border, then seek citizenship at a passport office. Their poly-cultural vision flows against the current of at least 60% of their Swiss compatriots, the ones who just voted for a referendum banning the construction of any new minarets in the entire country. A lot of europeans are paranoid about Islam, and rightly so, since their own religion has withered away. Euro churches are full of tourists clicking fotos, not the faithful or the penitent. Or maybe their fears stem from the fact that Islam is the most recent upgrade of the Sky God Religion from the mideast, version 3.0. Christianity (v2.0) is soooooo last century, a clunky obsolescent OS that people cling to out of nostalgia or loyalty. Even more hidebound are the users of version 1.0, the old skool, with their austere 8-bit hebrew graphics, always battling with users of version 3.0 about who's OS is "keeping it real" On the subject of throwing all the 3rd world muslims out of europe.....� it just happened to my music partner, Nova. Her� Euro (Schengen) visa reached it's 90-day end. �Fuera! back to Indonesia. It took us four months of constant effort and hundreds of dollars to get her that precious EU visa, she had many a flight or epic train trip to gather the papers: criminal background check, AIDS test, bank account info, medical checkup, job contract, all that supposed to be translated by certified (expensive) translators, notarized, legalized, stamped and sealed by distinct offices scattered across Java. Our first mistake was to begin with the Spanish embassy, until realizing it's a nest of corruption. The embassy staff make the process impossible via normal methods, while hustlers directly outside offer guaranteed�Spanish tourist visas for $$, obviously splitting the money with the employees on the inside.� We succeeded eventually with the German embassy, it's better to deal with rigorous officials than the corrupt. It was worth it the effort. Continuing with the nerdspeak, Nova is Filastine 4.0 (mixing, percussion, video, & now voice). She'll be sorely missed, both musically and personally. A�triptych�that shows the development of a live drum piece.1. studio- hallway next to my kitchen, Poble Nou 2. rehearsal- breakwater of Port of Barcelona 3. live- Kafe Antzokia, Bilbao (footage thanks to StereoZona) below pic from�Kafe Antzokia,�Bilbao, also�this excellent video at from same 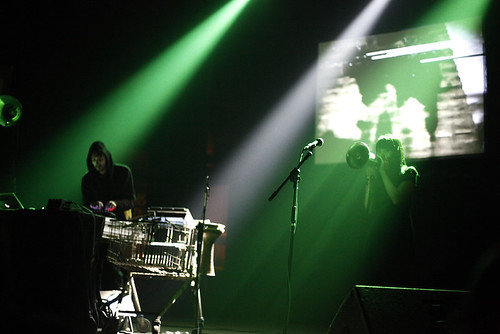