Europe. From the North to the South to the Motherfucking East!

Here I am in that bit of pre-perfromance time, the few hours between soundcheck and performance that I usually try, but fail, to take a siesta. This particular night is different. Since the stage isn't set up for video my VJ computer is unemployed. A rare chance to poop out another blog. Last weekend in Norway Filastine expanded and we were suddenly three, with Amelie (cello) and Nova (voice). We stayed an extra day after the performance in Stavanger with no plan for where to sleep, where to go, or how to get there, but with the singular purpose of experiencing a fjord. A contract worker from Romania who just left his job at an off-shore oil rig was our angel. The morning following the concert he brought us on the stunning hike to pulpit rock, a 2000 foot precipice dropping to Lysefjord. See embarrassing foto. 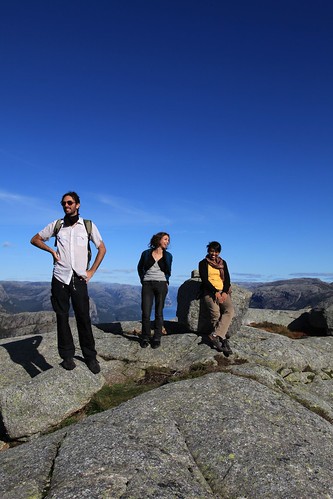 Norway is quietly drilling itself into being Saudia Arabia on ice. In fact the trickle down from those riches funded our performance (government subsidies for festivals), it's why we can be 3 in Norway, but tonight I am alone in Greece. So, I've officially nowhere to go tomorrow and haven't had a moment to research any plans for these free days before the flight to Russia. A tiny village near the sea would be perfect. Maybe those still exist in Greece? With old people who press their own olive oil and goats grazing in the hills. Some coastal place with no euro-trash discos nor luxury hotel towers. I have faith it can be found.