Last night we played� at El Tren, an enormous club in Granada. It's about time I added another story to the How I Made a Dirty Bomb page. On the guest list was the extended family of La Perla. She's the vocalist featured on Como Fugitivos, the last track on Dirty Bomb. She's a gypsy, which is a dubious word, but in spanish (gitana) it doesn't have a pejorative meaning. Imagine her mom, uncles, aunts, and cousins, all in their white track suits and gold jewelry, hanging out in a club full of drugged spanish gadjos. It's the kind of place they would never normally go, hearing a kind of music (electronic) they didn't even know they would dislike because they'd never heard, nor even imagined, it before. Props to them for coming to place so foreign to their tastes, and putting up with the volume, the zombies, and all the other things that make nightclubs so charming. The bridge between these worlds, and between me and this young gitana, is Carolina. She serves drinks at Eshavira, a tiny bar tucked away on a dead-end alleyway in the the Albayz�n district of Granada. It's a good place to see the roughest kind of flamenco, drunken gitanos with patent-leather shoes and barely-buttoned shirts do battle with guitars and voices ruined by smoke and drink, as people shout along & clap. It's a miracle that a place like this has survived until the year 2009, whether by luck, accident, or the decelerated pace of change in Andalucia. To enrich the plot, Carolina lives in a squatted cave, it's well-tended, more like a hobbit hole in the side of a grassy hill directly overlooking the muslim palace of Alhambra. The first time I arrived here was a few years ago, after deejaying until dawn, we arrived to make a breakfast. It was a beautiful spring morning, the hill blanketed by delicate red flowers covered in dew drops, the birds chirping, the neighbor's roosters announcing the day. My flight to Barcelona departed later that same day after a short nap, and there wasn't a moment of doubt that I'd return here. Semana Santa of 2008 I came back and stayed for a week in the cave, working on beatless track that I wanted to feature a flamenco vocal contribution. The woman who cleans the bar Eshavira (where Carolina bartends) has a 16 year old daughter, La Perla, known for her voice. The family lives in a zone of monotonous tower blocks on the periphery of Granada. I set up the adhoc studio in the cave, my fancy microphone duct-taped to a broomstick. La Perla came with another 16yr old gitana. With the two girls, Carolina, myself and Manuel, we were five in that humid little cave. There was no possibility of going outside due to a massive thunderstorm dumping continuous rain for the duration of the session. We tried many different ideas but eventually settled on adapting some of the lyrics of a famous song from a film set in a notorious barrio of Barcelona in the 80's. The original lyrics told the story of a specific outlaw, but we changed the verbs to command form. Instead of telling the story of a criminal, the lyrics give the order to rob and live outside the law.� For this I had to make a convincing argument to La Perla, explaining capitalist enclosure, privatization and control, and how one of the few forms of resistance available to us is economic sabotage, aka stealing. 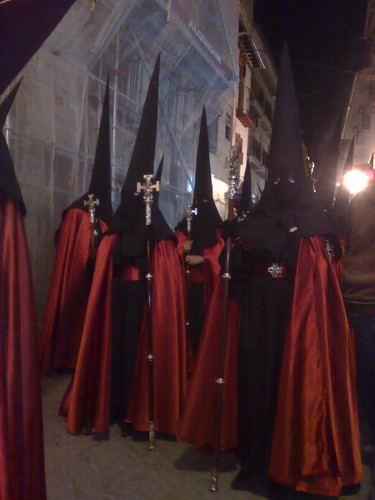 Later we returned the girls to their barrio, since this was Semana Santa we had to push our way through some twenty thousand KKK-dressed catholics. They meandered around the city from one holy site to another, bearing garish christian torture scenes. Each parade had a number of smartly uniformed marching bands belting out death waltzes at a slow goose-step. 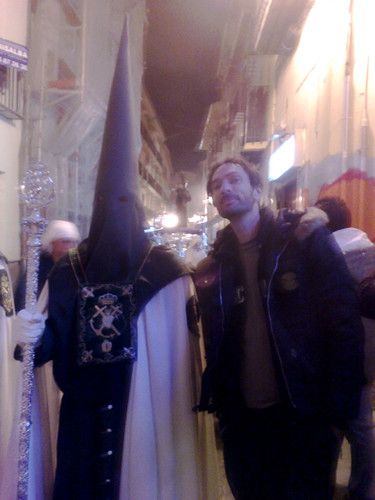 Como Fugitivos was later tarted up with bowed upright bass by Jherek Bischoff of The Dead Science. And of course a billion hours of editing on my part. One technique I used a lot was to take the final note of each vocal phrase, put that slice into a sampler and extend the tail of a phrase, manipulating it's loop fades, pitch and duration to make harmonic drones.