The vacation from being Filastine is about to come to an end. What have I been doing this last month? Mostly looking for an apartment, nothing could be more mundane and un-blogworthy. It's been a month nearly free of generating anything, leaving time to indulge in the hedonistic pleasure of being a culture consumer. A rare opportunity to read, watch movies, and listen to music than it is to write, edit video, and compose audio. Also more time for local adventures. I went walking with friends in Cap de Creu where we found some lost hunting dogs, after managing to reunite them with the owner we were invited to their lodge. It was exactly as you'd expect a rural spanish hunting lodge. A long rustic room with a burning hearth consuming half of one entire wall, animal heads, boar tusks, and antler mounted on every vertical surface, bearded men playing cards while smoking and drinking. Hunters are obliged to wear read when in the field, so they were all clothed head to toe in red, with a few fresh animal corpses laying around, well, it was just fucking weird. 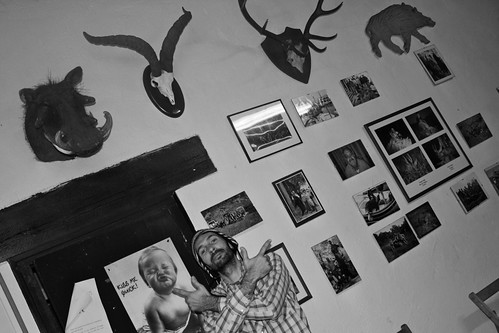 I finally explored the water mines of Can Mas Deu, the sprawling eco-squat in the hills above Barcelona. The building dates from the 14th century, but the mines could be older. They consist of narrow tunnels that shoot horizontally into the hill, barely big enough for a human body to squeeze through. Groundwater collects in the tunnel then flows towards the building. Deepest inside, past many strange insects and some calf-deep water pools is a round vertical shaft, basically it's like being at the bottom of a well, but sealed on the top, and raining underground. Here it was possible to shimmy up the sides ascend to another level of horizontal shafts. It's a good place for the antisocial. Urban Barcelona has begun to reveal her charms again, with the return of The Influencers. This year featuring a delegation from New York's Black Label Bike club, which was a good excuse to trot out the sound swarm equipment. See video. The big surprise of this year's festival was definitely James Acord. He's spent the better part of his 75 years working to make art that includes nuclear material. It's a story almost too incredible for re-telling. After the presentation he was told me that,�although now he is now marginally surviving via art sales,�for many years he worked night shift stacking tater-tots for a burger chain. I consider myself lucky to have escaped so young from the cum cleanup, animal corpse disposal, and taxi driving jobs that have kept me afloat until I moved to europe.